Giving is Not Painful 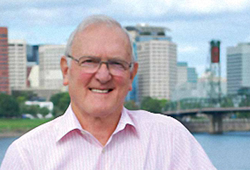 Committed philanthropist, volunteer, husband, father, grandfather, and great-grandfather Claris Poppert declared, "Giving should not be painful; it should be one of the most enjoyable acts in life."

In the 80s, Claris helped raise the funds to move OMSI from Washington Park to its current location on the southeast waterfront. He was then asked to be the corporate gifts chairman, which encouraged local businesses to support OMSI. Following, he joined OMSI's board and has been involved ever since. Most recently he completed the Coastal Discovery Center's fundraising campaign to build OMSI's residential camp in Newport, OR, an accomplishment that he easily recognizes as one of OMSI's finest achievements.

Such achievements led Claris to make a profound commitment to OMSI's mission and create his legacy. Claris sold his company, Pumilite Glass & Building Specialties, then initiated a planned gift to OMSI, giving back to the community that has given so much to so many, especially him. "When I made the gift I was cutting my taxes, too. There is a real tax advantage," he explained. He and his wife, Corlee, set up a charitable remainder trust that ensures them a lifetime income and, when they pass away, will distribute the remainder of the gift to OMSI and a few other charities. As a result of their generosity, both Claris and Corlee are members of OMSI's J.C. Stevens Legacy Society.

Claris believes supporting OMSI is creating opportunities for children to be inspired by and engage with science. He points out that our school systems are not set up to do the things that OMSI can. "You can't put everything that OMSI does in a classroom," he praises. "We have the equipment that children can use to solve problems and practice and develop 21st century skills."

Claris settled into retirement for the last few decades, but is not slowing down. He plays golf at least once a week and card games galore: poker, bridge, cribbage, you name it. He likes to point out that he learned to play cards long before smartphones. He is involved with his church as a property chairman; he has served on at least 12 board of directors for various non-profits; he is an Emeritus Trustee for OMSI, a lifetime Board Member for Willamette University, and has served as state and co-state chairman for several political campaigns. While serving his community, he always makes time to see his children, grandchildren, and great grandchildren.

Claris has had the pleasure of working with many leaders in our community and he feels the best—and one of his role models—is our very own Nancy Stueber, OMSI's President Emeritus. He lauds her as a marvelous leader that has done so much for science education here in Oregon and beyond.

OMSI thanks Claris and Corlee for making plans to support OMSI well into the future as a member of the J.C. Stevens Legacy Society.